Your present location：
Homepage
/
NEWS
/
Industry
/
Return of "Diwang" in 2015: more than half of "made by state owned enterprises"

(Summary description)In November, 67 pieces of land were launched in the land market of first tier cities, with a total starting price of 76.56 billion yuan, a record high in history. 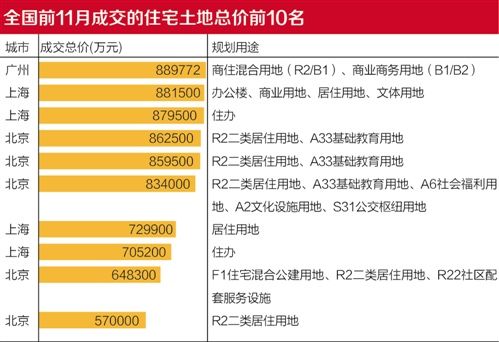 From January to November, 61% of the residential plots with the top 50 transaction prices were state-owned enterprises and central enterprises

The past November will undoubtedly be written into the history of land market in first tier cities.

In terms of transactions, 65 plots of land were sold in a single month in the first tier cities in November, with land transfer fees of 106.182.99 billion, setting a new record. At the same time, the transaction floor price also reached a new high in the year, reaching 12715 yuan, up 23.7% month on month.

"The most difficult stage of the real estate market has passed. Although there is obvious differentiation in the property market, the inventory time is long and short, and the price fluctuates, the real estate has reached the bottom under the favorable conditions of stabilizing housing consumption and promoting the sustainable and healthy development of real estate." On December 6, Miao LERU, vice president and Secretary General of China Real Estate Research Association, made the above remarks in an interview with 21st century economic reporter at the 2015 first Beijing Tianjin Hebei integrated industrial real estate forum hosted by China Real Estate Association and Yingshi group brand press conference.

The most difficult stage of the property market may have passed, but there are also hidden risks. This can be seen from the frequent occurrence of "flour is more expensive than bread" in the land market of first tier cities.

Since 2015, a major feature of the land market is also obvious differentiation, and the trend of real estate enterprises returning to the first and second tier cities is obvious.

According to the statistics of Central Plains real estate research department, since 2015, 20 benchmark real estate enterprises have invested 301 billion yuan in land market, and from the perspective of the proportion in first tier cities, the proportion has exceeded 40% for the first time in history, accounting for 44%.

The return of benchmark real estate enterprises to first tier cities has also pushed up land prices. By the end of November, land transfer fees in first tier cities reached 459.732 billion, and the annual turnover is expected to be around 500 billion.

This undoubtedly proves the two major characteristics of the land market in the first tier cities: the decrease of supply and the frequent emergence of land kings. Since the beginning of the year, Beijing Fengtai white pot kiln total price "Diwang" was born, the Beijing land market has opened the "Diwang" mode. According to the incomplete statistics of reporters from the 21st century economic report, the total price of the top 50 residential plots ranked in Beijing accounted for 17, accounting for 34%.

Shanghai is similar. On November 25, Shanghai Yangpu sold 7.299 billion unit price of land, with a floor price of 49000 yuan per square meter. The next day, Shanghai's land market sold 7.82 billion yuan again, and "Diwang" appeared in the North Bund.

"Flour is more expensive than bread" is undoubtedly a risk for the future market of first tier cities.

Taking Beijing as an example, as of the end of November 2015, of the 44 residential land transactions in Beijing, only 10 plots were independently acquired by private enterprises, including Vanke, Hengda, Xuhui, etc. In the other 34 plots, all or most of the participants were state-owned enterprises and central enterprises.

"Fewer and fewer private enterprises can get high-quality land in mainstream cities, and the oligopoly characteristics of the land market are becoming more and more obvious." Zhang Dawei, chief analyst of Zhongyuan Real Estate in Beijing, said that this also indicates that the land market will enter the era of oligarchy, and the market transaction will become a "game of giants". Not only is it more and more difficult for foreign small and medium-sized real estate enterprises to enter Beijing and into first tier cities, but enterprises with insufficient strength may even lose their living space and finally be squeezed out of the mainstream market. With the improvement of the threshold, the "state-owned" real estate enterprises with strong capital strength and rich local resources have begun to rise and become the main force of the land market, and the trend is more and more obvious.